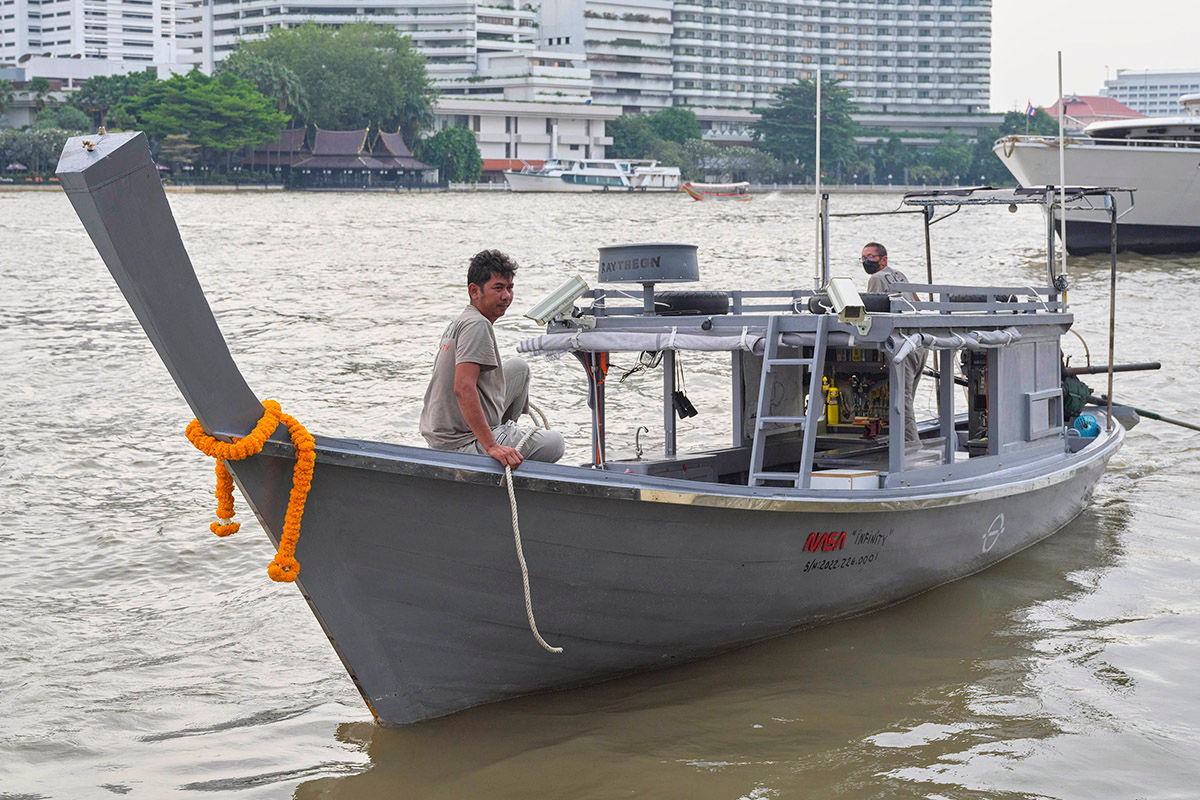 In conversation with artist Tom Sachs

A few days ago, I ate an Onam Sadya, a sumptuous vegetarian meal served on a banana leaf. Sadya is a banquet prepared for special occasions like festivals and weddings. It is a ritual meal in the sense that the type of dishes (salty, sweet, alkaline, sour, fried, sauces, dry, pickles, payasam, banana chips, as well as a small ripe banana), their number (between 20-26) as well as the order in which these are served on the sheet, are part of a well-established ritual.

In these days when Instagram generates “food trends”, the Sadya has become an annual celebration of Insta, with restaurants competing to serve the maximum number of dishes, influencers posting reels eating red matta rice with their fingers and most social media foodies dubbing this India. “the largest thali”.

But this chronicle is not devoted to the Sadya, a delicious feast no doubt. Instead, it’s thali – a particular way of serving and eating food that originated in ancient India, and is very different from the Russian service of formal Western meals, where food is served in dishes.

The coastal banana leaf of southern and eastern India is not only “auspicious” and therefore suitable for ritual meals like Sadya, but is a disposable and environmentally friendly plate or thali. In northern India, bronze kansa or thalis were traditionally used for meals often eaten in the kitchen itself by a family, and silver thalis were used by the elite. Communal banquets, however, involved similar disposable thalis (and bowls) made from lotus leaves or saal sewn together in which several concoctions would be served at the same time. We can still see it in less urbanized rural areas, although this culture of eating off the leaves is fading.

The metal thali or bowl coexisted with leaf ones, and in fact, contrary to assumptions, the story dates back to antiquity. From Buddhist accounts, folklore and iconography, we know of the existence of the metal bowl, carried not only by the Buddha but also by monks and bhikshus, who spread the philosophy and culture to the east and south of Magadh. These bhikshus accepted all the food given to them in their bowl, thus eating a frugal but varied meal consisting of various morsels.

In fact, the origin of the thali even predates the dispersal of Buddhist thought from India to the rest of Asia.

Rice was a strange crop for visitors to the western world until early India. Those visitors to ancient Greece who followed Alexander’s invasion in the 3rd century BC were more accustomed to barley or wheat. Accounts from the time of Alexander thus remark on rice, its varieties, and its popularity in Indian diets, but also inadvertently give us a picture of how this meal was served.

The Megasthenese Greek traveller, diplomat and explorer who was at the court of Chandragupta Maurya at Patliputra, for example, wrote in Indica, the first account of India by a Westerner (the book is lost but literary fragments found in other other later works have been used to reconstruct portions) that, “When the Indians are at supper, a table is placed before each person, this being like a tripod. A bowl of gold is placed in it, into which is put first rice, boiled as one would with barley (chondros, made from barley was a staple food of Greece), then many delicacies prepared according to Indian recipes are added to it” (World Literature and Thought, Donald S Gochberg).

From this account, the genesis of chowki and bol/thali can be inferred. It is remarkable how until the end of the 19th and even the beginning of the 20th century, many communities in India followed this exact style of serving and eating – food served all together, placed on a thali or plate round with raised edges similar to a bowl, which was kept on a chowki, of which the ancestor, the three-legged table Megasthenes also mentions.

One of my favorite references on Indian cuisine is KT Achaya’s dictionary. There are others but this is the one I refer to a lot. pic.twitter.com/F5vpltkVwx

Historian K.T. Achaya postulates that the “sthali” was a ritual pot for boiling rice in traditional Vedic cuisine. “The name survives in a modified form in today’s thali,” he postulates in The Illustrated Foods of India. The metal plate with raised edges may have evolved from the rice pot or the old bowl of the Mauritian period, as the number of accompaniments to be eaten with rice increased. Achaya also points out that the custom of metal thalis spread from northern India to other regions, although large banquets in which many people must be fed continued to use cheaper disposable sheets.

For those studying the dispersal of ancient Indian cultures throughout the rest of Asia, it may be of interest to study the culinary rituals of much of Southeast and East Asia, where the rice is a blank canvas on which many types of preparations are placed. and eaten – incorporating different tastes, vegetables and protein bits and condiments, accompanied by a soup or braised dish. These bowls are actually much the same as the thali, or its earliest version, the Mauryan bowl.

what do you think of this bronze bowl with Griffins? from southern Thailand nr the main trading port Khao Sam Kaeo, believed to be of India, from the Mauryan period to Sunga (3rd BCE – 2nd CE) #griffin pic.twitter.com/Xym7l9WYTT

From Japanese donburi (literally, bowl) consisting of fish/meat/vegetables simmered together and served over rice, to Korean bowls such as bibimbap (rice, seasoned vegetables, meat, eggs and a variety of toppings are combined), all have a resonance not only of the bowls of Buddhist bhikshus, in which all sorts of flavors combined in bhiksha (almsgiving), but of the way of eating described by Megasthenese.

This idea of ​​eating rice or a main starch with a combination of various flavors in one meal is also symbolic, not just “balanced” in the modern sense with carbohydrates, proteins and vitamins. The idea of ​​balance or harmony is central to ancient Buddhist/Indian thought, and we see it not just in Asian bowls, but as a foundation of Indian cuisine as a whole. The use of spices in India is actually based on the balance of doshas and gunas, according to Ayurveda, and the balance of different flavors – sweet, sour, salty, astringent, bitter – even in one dish. For example, in a bitter gourd dish in UP, the typical spice is fennel, with its sweet notes, and raw mango to incorporate the acid. Sometimes cooks use a pinch of sugar to balance it all out. This balance of flavors even in individual dishes is also a feature of Thai cuisine, which has been deeply influenced.

If the Indian thali/bowl has led to the most distinctive feature of Asian gastronomy, the balance of flavors, Western meals that follow Russian service or Russian-style service, are very different from this idea.

The Russian service style adopted by most French restaurants and formal Western dining became popular in the 19th century. Meals here come in different courses, each served by a waiter. The idea is for each dish and a single ingredient in that dish to stand out instead of being a jumble of flavors, textures and colors.

The medieval French service was initially a mixture of dishes assembled at the same time on a table, with lavish table settings and decorations to evoke wealth and status. Russian Ambassador Alexander Kurakin is credited with bringing the new Russian service to France in 1810.

#FoodFacts: The French style was grander, the Russian style had the advantage that your food was much hotter when it arrived at the restaurant, thus reducing the number of dishes and condiments on the table. The Russian ambassador credited with this was Alexander Kurakin | https://t.co/sVD0jEdIqz pic.twitter.com/0BHoJgshbi

By the end of the 19th century, this new style had established itself not only in France but also in England. The new service reduced the number of dishes and the dishes could be eaten hot, but more staff, such as footmen, were needed to serve the meal, as fans of Downton Abbey no doubt know. Its influence can still be seen in fine dining, as high-end restaurants follow this style.

But in 19th-century Anglicized Bengali homes, this Russian-style service was adopted to give the Bengali Thala a distinctive twist. A Bengali meal is also served and eaten in dishes – bitters, vegetables, dal, fish, mutton, yoghurt, sweet and paan follow each other in an organized progression but all are eaten with a central starch or rice as in all other Indian thali . It is therefore a fusion of eastern and western food styles: thali divided into dishes.

However, it is not as if thali in all other parts of India, including among the Kokanastha Brahmins in Maharashtra and Karnataka, is not an ordered meal. What is placed first and where on the thali sheet or metal has ritual significance. Interestingly, salt, once the most important preservative and flavoring agent, a currency in its own right in the ancient world (the word salary comes from salt), is placed first on every thali, along with lime , followed by chutney or pickles and fries, followed by a light, dry vegetable, and a spicier one, which cannot precede the lighter vegetable, and so on. Yogurt, an important food in India, comes towards the end, along with milky sweets. Lighter, less spicy dishes are eaten before heavier ones, finishing with yogurt to soothe the stomach. It is therefore a wide structure for most Indian thalis.

Thalis are actually ordered meals, contrary to popular belief, much like a Western service. But they are balanced with small portions of different foods instead of the protein-rich dishes of the West where one meat or ingredient dominates. It is this difference between balance and dominance, cultural, philosophical and culinary, that makes it so difficult for most European or American chefs to understand the complexity of Indian flavors and spices, and how notes can be layered and combined to produce a complex yet harmonious blend. together.

Previous The HealthBarn Foundation is looking for volunteers to deliver meals
Next With $968m in loans, India overtakes China to become Sri Lanka’s top lender

Jeep arrives in East Arlington and receives a hero’s welcome

BoonNoon Market has been getting a lot of attention over the past few months, and …